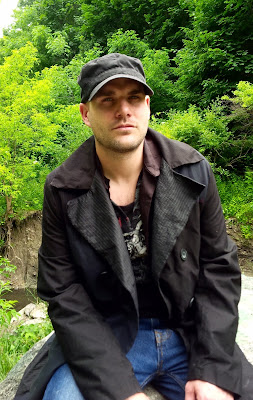 
Where are you from?
I am from Nova Scotia. I grew up in a very Celtic family, life encircled the highland games.
I grew up with a very artistic and rebellious crowd, hidden in a crowd of skaters, punks, goths and neohippies. I studied acting and music in Nova Scotia and moved to Toronto to study classical guitar and composition and to create something different of my own.  Embracing myself in the artistic societies of Toronto, the bohemian culture and gothic overtones that have always made Toronto great.

Who is in your band?
Keddy consists of myself and a long-time friend and collaborative partner Michael Kolk; a master of the guitar like myself, he an Estonian; a viking hailing from Vancouver. We met in Toronto while studying with the same teachers and partaking in the University of Toronto Guitar Orchestra. Our musical tastes being very similar in both rock music and classical music we work very well together.

How would you describe yourselves?
There is a very wild and formal side to what I create. Much like the established Gaulish and gothic ancestor compliments the more earth enriched Pictish/Ojibwe aspect of my genes. We are initially encouraged to look towards pop culture for answers to who we are, usually becoming lost or sheepish in the process. But if we study our roots, particularly prior to the Roman conquests of Europe we can really see why we are drawn to certain things. As if it is trying to feel in tune with us also.So with this in mind I want there to be an archaic/shamatic side, very real and pure, but I also want it to have a darkened angelic side. Having both "scholarly" and "folkish" aspects to the work. Ecstasy created some without boundaries and others very much deriving its power or focus from control.
Who are your main influences musically?
As a very young listener it began with the recordings of Elvis, later progressing to works of Andrew Lloyd Webber. I am inspired by psychedelic rock music of the late 60s early 70s and the grunge/industrial rock that was popular in the 90s.  My tastes becoming more and more eclectic as I become more educated and involved in the culture and subcultures present. That being said I am very inspired by so-called "dark ambient" artists such as "Lustmord" and "Herbst 9".  From the guitar perspective I am very influenced by lute compositions of Silvuis Leopold Weiss and John Dowland  and contemporary such as composers Phillip Houghton and Leo Brouwer. For vocal arrangement  Henry Purcell, the Gregorian Chants made famous by the Monks of the Benedictine Abbey, John Tavener. and the choral works of WA Mozart. Very much inspired by the contrapuntal techniques of Palestrina JS Bach and Jean Phillip Rameau to the minimalism of Eric Satie. The more complex and agitated works of Demetri Shostakovitch Igor Stravinsky and Bela Bartok. I am inspired by "neo celtic" groups such as "Garmarna" "Faun" and "Wardruna" for their aesthetic approach and cultural identity.

What has been the highlight of your career so far, and why?
Everything has been preparation for Keddy, which began in May of this year. It will be a conduit for all the works I have created over the last decade or more. For me embracing my own style was the greatest highlight. As finding my "voice" was a great triumph in itself and being able to share something so sentimental and perfect in itself observing it as its own being, with its own distinct spirit. I have played many shows at some of the greatest venues in Canada, and recorded in the best studios, but creating and polishing something you feel very attached to have proven to be the most rewarding.


If you had to pick just one of your songs to represent your music, what would it be and why?
I would say "The Hive" is the best recorded representation of my musical direction.

Where can we listen to it?
https://www.youtube.com/watch?v=Vw9or8zEHww

Anything else you’d like to say about your band/music that I forgot to ask?
Keddy is a name created by Pictish/Gaelic Druids meaning "friend" coming from the ancient tribe of "Cernonnicae" followers of "Cernunnos" the antlered agricultural god, neighbouring the "Crownies" or "Crow people" and "Cat" or Cat people of Northern Scotland. In the Highlands of Ross also known as the clan of "Fidach" sons of Cruithne. Heavily influenced by Egyptian Princess Scotia and Norse culture.
Posted by RealSoundsOK at 22:56