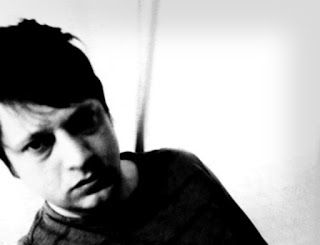 Where are you from?
Chicago, IL right now.

Who else is in your band?
For now Starfinder is a project where I write, perform, and record all the music. Although in the future I may have some other members for live performance.

How would you describe yourselves and your music?
I'm a punk rock guy at heart who has also loved new wave and synthpop since I was a young teen. I've been a member of several past and present punk, garage, and indie rock bands including Porno Mags, whose self-released debut album peaked at #47 on CMJ in 2014. I also a member of Chicago bands Witchfeet and Joy Shooters. I started messing around with synthesizers and samplers about five months ago and decided to start writing 80s influenced new wave tunes in my spare time. It's been a blast so far and I'm just completely out of this world happy how well received my first two singles have been by both fans and the media.

Who are your main influences musically?
They are all over the place. I love 70s punk like Ramones, Buzzcocks, The Jam and stuff like that. I'm also a huge fan of old power pop and garage rock like The Real Kids. 90s indie rock is something I'm way into as well, stuff like Guided by Voices, Dinosaur Jr, etc. For Starfinder I take a lot influence from bands that used a lot of electronic elements like New Order, Depeche Mode, The Cure, Pet Shop Boys, Human League, and stuff like that. Blend all of this together and that's where Starfinder comes from.

What do you hope to achieve in music?
Ideally I'd love to find a label interested in pressing some vinyl for Starfinder. I'd also like to do some short tours with Starfinder in the future, possibly with a couple other people to help pull it off live. Mainly I just want to keep writing songs and sharing them with anyone who's into it. It's really rewarding just working on music on my own and releasing songs when I can.

What has been the highlight of your career so far, and why?
I've had lots of great things happen over the years. Touring in some of my bands, meeting great people all over the US, getting played on college radio all over the US and charting on CMJ, playing street festivals here in Chicago, hearing Starfinder on the Synth City radio show in the UK, playing really fun house shows, recently having Starfinder reviewed on the Indie Rock Cafe blog, the list goes on...

And what’s the moment you want to forget?
Definitely had lots of van break downs in the past when touring. One time it was the middle of winter in Wyoming in a huge snow storm. We had to wait for a couple hours for tow truck in no heat. As we were sitting there on the side of the road, we saw a flatbed tow truck coming in our rear view mirror. We were happy to see our tow truck coming, when all of a sudden the truck started sliding sideways. The truck slid off the road at like 50 miles an hour and missed hitting our van by inches. It was really scary. Luckily that wasn't the truck coming for us! Another time our van flew off the road, again in the snow and did a 180 spin at like 70 mph all the way across to the other side of the highway. That was probably the single scariest moment of my life.

If you had to pick just one of your songs to represent your music, what would it be and why?
Well, I only have two singles out right now so either one is pretty representational of the band at this point but I'll go ahead and pick "If I Were You", it seems to be the fan favorite right now.

Where can we listen to it?
https://soundcloud.com/starfinderchicago/if-i-were-you-single-mix