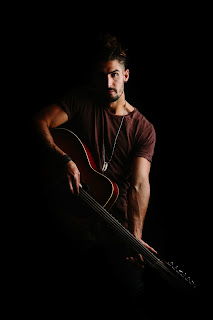 Where are you from?
Born and bred on the famous Sunshine Coast, Queensland, Australia.

Who else is in your live band?
I have been predominately been a solo multi-instrumentalist for some time now but as of late have finally formed a small band. I use a drummer trained in Middle Eastern percussion, and switch between a bassist and a lead guitarist. I play guitars, didgeridoos, harmonica and do vocals.

How would you describe your sound?
I have branded my sound as "Earth Rock" which is a colourful mixture of roots, indie, rock, blues and folk. We have been described to be extremely uplifting, upbeat, funky and powerful with a touch of tribal spirit.

Who are your main influences musically?
My Dad has probably been my biggest hero and inspiration. Since I was a grommet he's been gigging with many different bands. I also dig Xavier Rudd, John Butler, Ash Grunwald - actually theres too many to list. I'm really influenced by many genres and artists.

What do you hope to achieve in music?
My goal is to travel abroad globally playing shows, sharing my music's message and to becoming recognised as a key Australian singer-songwriter talent in the industry for my compositions.

What has been the highlight of your career so far, and why?
Wow there have been so many highlights. I get a huge buzz off playing to big crowds. Some happy memories:
1. Fans coming up and expressing how much my music has touched there heart and changed their life.
2. Playing MainStage at local festivals.
3. Supporting The Black Sorrows, Ash Grunwald, Wild Marmalade w/ Paul George from Tijuana Cartel, Kooyeh and many other Artists I love.
4. Recording my first Album (A NEW SUN), my E.P (When The Gold Is Gone) and finally my latest Single release (Kings Of High).
5. Touring. I love it.

And what’s the moment you want to forget?
My capo exploding at an intimate show and the parts shooting in people’s faces. Haha funny, but not funny.

If you had to pick just one of your songs to represent your music, what would it be and why?
Ohh Maybe "When The Gold Is Gone". It’s tribal raw roots, what I love and do best.

Where can we listen to it?
https://www.youtube.com/watch?v=PvLOj8M3Zlg

Anything else you’d like to say about your music that I forgot to ask?
Music has become more than an self-expression for me it’s become a way of living and viewing life. Each and every song is so special capturing a snippet of time in the past or future at that very moment it was created. I have come to see the importance for music in our world and am grateful as an emerging artist to understand this truth and share the heart of music with you all. Cheers for the recognition.

Posted by RealSoundsOK at 12:00 No comments:

Where are you from?
Sydney, Australia.

Who else is in your band?
Jules Wucherer - Guitars, Theo Henry - Drums, Jordan Glass – Bass.

How would you describe yourselves?
We’re nice guys, I think. We’re ok at playing music too, so that’s alright. We play a bit of modern rock mixed with the tiniest hint of pop.

What do you hope to achieve in music?
Just to be able to have it as a full time job would be epic! Hopefully people like it along the way too.

What has been the highlight of your career so far, and why?
Finishing "Whatever You Do, Don’t", because it took three years and we FINALLY did it.

If you had to pick just one of your songs to represent your music, what would it be and why?
Probably Coming Home. It’s an honest rock song tackling the real life issue of PTSD. We came up with it as a band and it’s my personal favourite on the record.

Where can we listen to it?
All good online retailers.

Posted by RealSoundsOK at 12:00 No comments: 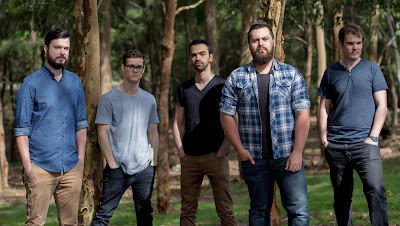 Where are you from?
Sydney, Australia.

Name of band:
Without Wings.

Who else is in the band?
Simon and Roger on guitars, Moose on vocals and Shaun on drums

How would you describe yourselves and your music?
Musically I would say we are a progressive rock band that love to be loud and punchy but then also melodic in a way that we will stay in your head forever. As a group of guys we are all fun and energetic, always looking for ways to stir one another up for a laugh and maintain our strong camaraderie.

Who are your main influences musically?
The biggest two are definitely Karnivool and The Butterfly Effect. Whenever we hear or talk about their songs the conversations last for ages and often turn into Shaun bringing up a video of them on YouTube mid rehearsal then realising 20 minutes have passed by.

What do you hope to achieve in music?
To be honest when we became a full line-up it was without any major goals or agendas. Individually we each just wanted to have some fun playing and collaborating with strangers, and seeing what sort of relationship and sound we would build together. Once we knew we were clicking together and decided to hit the recording studio, it became a bit more results focused. Even still the main desire is to just play music with one another and have fun with it. It would be nice to reinvigorate the prog rock scene in Oz and give a different taste and feel to the genre, but so long as we are having fun and people are digging the sound we don’t mind where it takes us.

What has been the highlight of you career so far?
Definitely the EP release. Whilst we have all been in other music scenes and bands, I myself never had the chance to take it to a recording studio and experience the actual printing of something with my name on it, so I’m very excited and happy to have done it in a genre that I hadn’t participated in before. And also do it with some great blokes.

And what’s the moment you want to forget?
Having just shared my excitement at being in a studio for the first time it’s probably also something that caused the most stress, and at times made us experience each other’s limits for the first time as well. Whilst it was an amazing process and 99% of it was incredibly fun, that 1% was enough to make us realise that next time we hit the studio it will be with a different and more organised approach.

If you had to pick one song to represent your music what would it be and why?
Definitely Fire. When describing the band we say loud and punchy but also soft and melodic. Well, that describes Fire. It’s certainly the song that helped us find our sound and direction for the future.

Where can we listen to it?
Here on Spotify

Where can we find out about your music?


We are on most social avenues of course, you can find us on Facebook, Spotify, iTunes and we also have our official website withoutwings.com.au where you can grab a copy of Catharsis.
Posted by RealSoundsOK at 14:00 No comments:

Where are you from?
Atlanta, Georgia (Formerly Athens, Georgia).

Who else is in your band?
Just me right now! But I'm looking for a live band.

How would you describe yourselves?
I'd describe Heaveneers as rock music that doesn't fall into the usual trap of topics and sounds. I've really started writing about a lot of science fiction topics and experimenting with different tones, so hopefully that's made the music somewhat unique.

Who are your main influences musically?
Muse, Queens of the Stone Age, Nine Inch Nails.

What do you hope to achieve in music?
I'd like to play a show at the Tabernacle, in Atlanta.

What has been the highlight of your career so far, and why?
Well Heaveneers is pretty new, so I haven't had too many experiences, but I'd say that recording the songs on my EP was by far the most fun I've had making music in at least 5 years.

And what’s the moment you want to forget?
Mixing the song Fascination was a pain, but I suppose it turned out alright. Sometimes songs just give you a lot of trouble.

If you had to pick just one of your songs to represent your music, what would it be and why?
I'd pick the Old Guard. It's definitely my most popular and it is really driving.

Where can we listen to it?
https://soundcloud.com/heaveneers/the-old-guard

Where can we find out more about your music?
I'm on pretty much every streaming service, but you can also go to my Facebook (https://www.facebook.com/Heaveneers/), Twitter (https://twitter.com/Heaveneers), or if you ask nice enough I'll give you my phone number and we can text.

Anything else you’d like to say about your band/music that I forgot to ask?
You covered most of the bases! I'm just getting into the swing of things with Heaveneers, so thanks for listening!
Posted by RealSoundsOK at 22:00 No comments: 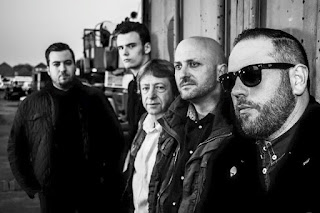 Where are you from?
Nottingham, UK.

Who else is in your band?
Neil Cook on Bass Guitar, Chris Bucknall on Keyboards, Jack Donald on lead guitar and Danny Gould on Drums.

How would you describe yourselves and your music?
We are a UK country music band.

Who are your main influences musically?
We are influenced by Zac Brown Band, Lynrd Skynrd, Fleetwood Mac, The Eagles, The Band and Reckless Kelly.

What do you hope to achieve in music?
We just want to progress as far as we can, make good music and enjoy the lives we have been given. We want to make people dance and enjoy themselves!

What has been the highlight of your career so far, and why?
My personal highlights are probably playing Wembley Stadium at the FA Cup Final, opening for Status Quo, winning a BCMA Award (British Country Music) and getting to make an album with one of my heroes Steve Craddock of Ocean Colour Scene/Paul Weller fame.

And what’s the moment you want to forget?
I think all experiences, good or bad, are what shape you as a performer and musician so there is not really anything I would want to forget – maybe just do a little differently ha ha!!

If you had to pick just one of your songs to represent your music, what would it be and why?
I’m not sure I can pick just one. They are all written from life experiences and are about different periods of my life but so I’m not being too evasive I would say ‘PS. I Loved You’ as it is a very personal song to me.

Where can we listen to it?
This song is actually featured on our Acoustic EP which is only available at our gigs at the moment, however, we released our debut single ‘Shatter Like Glass’ last month and this got to number 4 on the iTunes Country Chart.
You can download that from https://itunes.apple.com/us/album/shatter-like-glass-single/id1158482413