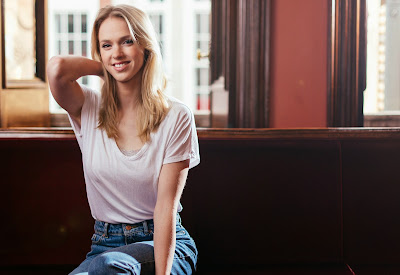 Where are you from?
I am originally from Norway - but now I live in London!

Name of band:
I go under my name, Liv Austen, but I have a permanent band backing me.

Who else is in your band?
I have two guitarists; Lee and Mike, my drummer Luke, bass player Nigel and pianist Wayne.

How would you describe yourselves and your music?
I usually go between calling what I do new country and singer/songwriter. I feel the latter is a bit vague! I guess country is the best way to describe it. I love discovering new things to do musically with my songs - especially because my band is fantastic, but my songs are very lyric-driven. I wouldn't be a songwriter if I couldn't put the lyrics first. To me having something to say in your songs is incredibly important! But we also like to just have fun and entertain people.

What do you hope to achieve in music?
My goal is to be able to live off my music, meaning I would love to tour with my band and share my songs to audiences in different countries all over the world. I have so many songs I want to share and my next project will probably be another EP, after that I hope to start releasing full length albums. And I see myself as a songwriter just as much as I see myself as a singer, so I would love to have other artists sing songs that I've written.

What has been the highlight of your career so far, and why?
I think the highlight so far was to perform at the Brooklyn Bowl stage at Country2Country, the UK's biggest festival for modern country. I had no idea if anyone was going to show up and I walked on stage to an audience of several hundred people! It was a fantastic experience and has lead to a lot of great opportunities. I was very nervous and excited that day and probably didn't do my best vocal performance! But it was a wonderful memory and a moment that made me think "yes, I can do this".

And what’s the moment you want to forget?
Great question! When I was first starting out I would take any gig that came my way, and I remember performing in this quite trendy pub, with some guys thinking they were way too hipster and cool for my music trying to heckle me while I was performing. I can always think back to those first gigs from before I had a fan base and it'll definitely keep my feet on the ground!

If you had to pick just one of your songs to represent your music, what would it be and why?
That is incredibly difficult. But I am going to go with Rain On My Side, it is my first single from my debut EP and you can hear that it is somewhere between pop and country.

Where can we listen to it?
You can check it out on YouTube here: https://www.youtube.com/watch?v=rUKRblGOJxI or on SoundCloud here: https://soundcloud.com/liv-austen/rain-on-my-side

Anything else you’d like to say about your music that I forgot to ask?


I have quite a lot of shows coming up - both acoustic and with a full band - you can have a look on my website to see if I'm playing near you in the future!
Posted by RealSoundsOK at 15:17