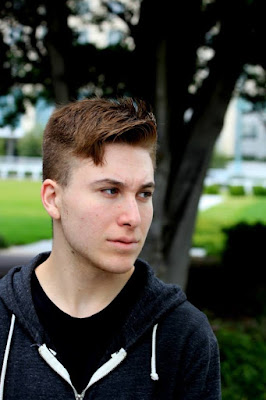 Where are you from?
I am from Yardley, PA.

How would you describe yourselves and your music?
I would describe myself as an artist first and foremost. I compose and produce music. I am also an illustrator. Aside from this, I have a passion for creative writing, as well as photography.
In regards to my music, I would describe it as atmospheric in nature. Ultimately though, my sound is influenced by a multitude of genres.

Who are your main influences musically?
Primarily, I am influenced by Depeche Mode. My other musical influences include Tears For Fears, Cocteau Twins, Genesis, Phil Collins, Drake, Illangelo, The Weeknd, Partynextdoor, The 1975, Sade, Brian Eno, M83, Washed Out, Kanye West, and The Japanese House.

What do you hope to achieve in music?
Music has brought me both joy and a sense of peace. At the end of the day, I hope my music can do the same for others. Ultimately though, I hope to have a positive impact on the world through my art.

What has been the highlight of your career so far, and why?
Recently, I have had the opportunity to work with the singer, Res. A few years ago, she released a cover album of Fleetwood Mac songs, Refried Mac. One of the songs she covered was “Dreams.” I am a college student studying music production. Last year, I took a production class taught by Tom Spiker, who produced Refried Mac. For a final assignment, he presented students with the option of creating a remix of “Dreams.” I chose to do this. Upon creating my remix, I wanted to get it Res, as I was wondering what she thought of it. After trying to get in touch with her earlier this year, she responded, telling me how much she enjoyed it. She then explained how she wanted to include it with rare tracks of hers as a thank you to fans who donate to her upcoming Kickstarter campaign. Following this, she asked me to choose another song to remix from Refried Mac. I decided to create a remix of her cover of “Little Lies.” I had the chance to meet with her in person this past summer when she visited Philadelphia. Looking back, I feel so grateful for having had that opportunity.
Res is such a talented vocalist and musician! I thank her for everything.

And what’s the moment you want to forget?
I do not want to forget anything, as everything I have experienced thus far has made me who I am today.

If you had to pick just one of your songs to represent your music, what would it be and why?
As opposed to one song, I would instead recommend my debut EP, Reflections. I feel it introduces me best, encompassing the various styles of music which influence my sound.

Where can we listen to it?
soundcloud.com/vincent-paragano/sets/reflections-ep

Anything else you’d like to say about your music that I forgot to ask?
The cover of my debut EP was photographed by my uncle, Glenn Race. He brought such a unique and creative vision to the process. I thank him for everything as well.


His website can be found here: http://www.glennrace.com
Posted by RealSoundsOK at 14:07