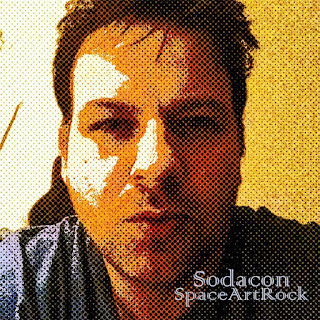 Where are you from?
Magna, Utah. I grew up and was raised in Magna on the west side of Salt Lake. I could easily say I'm from Salt Lake yet I tell everyone I'm from Magna because it's a small town that rocks has a lot of great music.

Who else is in your band?
Currently I'm a solo artist and 95 per cent of the Sodacon project has been solo. We have performed live with Sodacon back in 2007 and toured solo too. Other than the second Sodacon album, all successive albums have been solo.

How would you describe yourselves and your music?
I would just say a lot of hard work and elbow grease over the years to create this sound. Currently I perform using Logic Mainstage and sometimes stream online using Stageit playing acoustic guitar. These days I try to live stream if possible, regardless of the venue if there's online access. Playing solo has helped to develop a unique style. Sodacon is like a space ship of electronic space rock journeying into progressive themes. I sing about a about broad range of things, it could be current events, space satellites, portals to other galaxies. Generally I stick to space rock sci-fi themes and create characters I can perform on stage with story albums. I wrote and recorded an album Electro-Magnet, never got the chance to play it live yet planning to this year. I continually discover new themes to sing about and look to explore topics that aren't mainstream. I've loved making music all these years and found my own niche.

Who are your main influences musically?
I grew up with vinyl and cassettes and early cable days with MTV rock bands and the alternative wave. I'd play my guitar and riff out to many different bands. I was fortunate enough to have great teachers growing up for piano, clarinet, and guitar playing jazz band in high school. I was always inspired by my musical peers and the same is true today. I was able to perform with and hang out with different groups around Salt Lake and also see large concerts that came to town. As time went on I got into vinyl, listened to jazz, folk, class rock. A broad range of guitar music, to drop some names James Brown to Michael Hedges to Kaiser Chiefs to the Temples. I also love riding my exercise bike and listening to Iron Maiden Book of Souls. Sometimes I'll throw on something like Bill Withers or ELO. I know I'm leaving a lot out that I listen to and my playlist varies yet I dig finding new bands.

What do you hope to achieve in music?
I'm hoping to make music that brings joy to people, and inspires new ideas that are remembered for a long time. In the short term focused on another album possibly live shows this summer hopefully some festivals. More so than ever trying to professionalize everything that I do. I hope we can keep the momentum going as we're currently #1 locally and regionally on Reverbnation for Alternative Rock. This morning we made it into the top 10 and hit #8 nationally for alternative and #9 global. I always hope to be collaborating to. I just finished a new song and released it last weekend featuring David Namerow on percussion. The song is called Lightning Maze and is available on reverbnation.com/sodacon. I've been marveling at how the last few years not too many projects with other artists due to time constraints. Yet things have opened up and now in the span of a week have worked on two new collaboration tracks.

What has been the highlight of your career so far, and why?
Biggest highlight so far was being able to finish the last album SpaceArtRock and the positive response after everything that happened the last few years. For a long time I didn't think I was going to finish the project. I had just became a dad and had finished school in looking for work. Over time I was able to resolve these things, find work again and got right back at my tunes and then it got better. Somehow we found a way through lately I enjoy making tracks and my son chills with me in studio sometimes while I mix. It's been a blast being a dad and for sure the best of year of my life. There is always a lot of work to be done. I'd say a moment that comes close to this yet doesn't exceed it that was when won battle of bands performing Sodacon solo in November 2011. We also raised 1300 cans of food for the homeless that night so all in all a great memory.

And what’s the moment you want to forget?
I'd like to forget last year in May when our dog of 12 years AnnaBelle passed away from cancer. I try not to repeat it in my mind and remember when we'd go on hikes and play frisbee. It was tough having to get so many operations for her and that was financially difficult. Our efforts were ultimately fruitless yet she was brave and fought through it all. Even on her last day she was running I will miss that dog yet now that a little time has passed it makes me have hope for the future and maybe a new pet. I know it's just a dog yet was a big part of the family. Despite all the trouble we had in our lives economically because of the recession and everything else horrible that happened, all of it was a drop in the bucket compared to losing Belle. It also brought up memories of losing my grandpa in 2009 when he passed although ultimately I'm glad we got to spend time together.
There was also a moment a few years back when I was completely without any resource trying to work on songs, distribute records, tour, web design, social media and more.  I ended up burning out and had too much responsibility that I didn't need to take on my own. Yet it could have been worse and I learned to re-balance my life in recent years. Now I try to just keep things simple . I'll continue to surround myself with great people like my better half Alicia and my son. I've had great friends over the years help me out in a lot of areas. 'm grateful for that and I want to forget the times I tried to overdo every aspect of the process on my own. If I can continue to write songs well then the rest will take care of itself.

If you had to pick just one of your songs to represent your music, what would it be and why?
Now You're On Track from the album Electro-Magnet. This particular song is one of my favorite compositions just for it's grit and intensity. It has more of an electronic rock feel and is currently one of the most played Sodacon tracks. It was the first Sodacon music video filmed a video for it back in 2009 riding around on the San Francisco Bart and walking around the city. If you'd like to check it out it's available at http://bit.ly/nowontrack.

Where can we listen to it?
http://www.reverbnation.com/sodacon

Anything else you’d like to say about your music that I forgot to ask?
We just created a brand new YouTube channel and have been uploading new music video there. Please subscribe if possible http://youtube.com/sodaconmusic
Booking and info sodacon@gmail.com
Posted by RealSoundsOK at 14:38