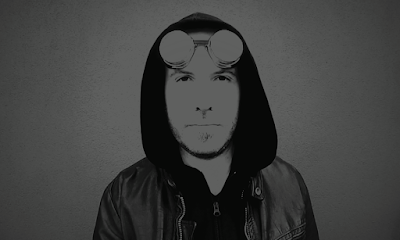 Where are you from?
I'm from Canada.

How would you describe yourselves and your music?
I like to say that I write 'post-apocalyptic love songs'. The music is best described as synthpop. Myself, I'm a bit of an introvert. I've always had a different world that goes on inside my head.

Who are your main influences musically?
As a young kid I found a copy of Duran Duran's 'Seven and the Ragged Tiger' and I remember really liking that album. I was a pre-teen through the 80's and maybe it's nostalgia, but I really love all the poppy synth stuff from that era and I think that that can be heard in my music. More modern influence would definitely be Kavinsky and College. I really like the Chvrches album from a couple years ago and lately I'm really into synthwave/outrun stuff like Lazerhawk and Bourgeoisie, which will probably be evident on my next album.

What do you hope to achieve in music?
I hope to keep producing music, whether it's my own or other artists that I find a passion for. I want to keep making synth and electronic music, using computers and hopefully help to advance the popularity of this kind of music in North America (where music has been stuck in a rut for a long time in my opinion) and hopefully find fans all over the world that like what I do.

What has been the highlight of your career so far, and why?
It could have been that I was nominated for a Juno (Canadian Music Award) with my former band Smoother, but I would have to say releasing my solo album The Stars Shine For You, because it proved to myself that I can make and release music the way I want to do it, writing, recording, producing and not having to let other people influence the final outcome. It may sound strange but it really is a struggle to be happy with the final outcomes of recordings, but I can say I'm happy with how this album turned out.

And what’s the moment you want to forget?
One time, with my old band Smoother, I was late to a big show (opening up for Nickelback) because I couldn't find the venue (it was an outdoor open air afternoon show in the summer), when I finally arrived my band was already on stage playing and making a mess of things, I got on stage shouted some profanity to the effect of 'Where the @%#& is ______?' or something only to realize that the audience was all families with little kids. Needless to say I felt like a big ass that day.

If you had to pick just one of your songs to represent your music, what would it be and why?
I think the song 'Adorable Freaks' off of my album The Stars Shine For You. 'We are not so forget-able, we are not just adorable freaks, we are not too scared to make them believe that we care'. In a vague way it kind of sums things up. And of course it's full of hooky melodies, which I have always needed to put in my songs.

Where can we listen to it?
andrewfraney.bandcamp.com

Anything else you’d like to say about your music that I forgot to ask?
Just that I hope everyone will give the album a listen through. It's meant to be listened to as an album and not just for the odd song. It's important to me to make a great album and not just a couple singles.
Posted by RealSoundsOK at 13:28