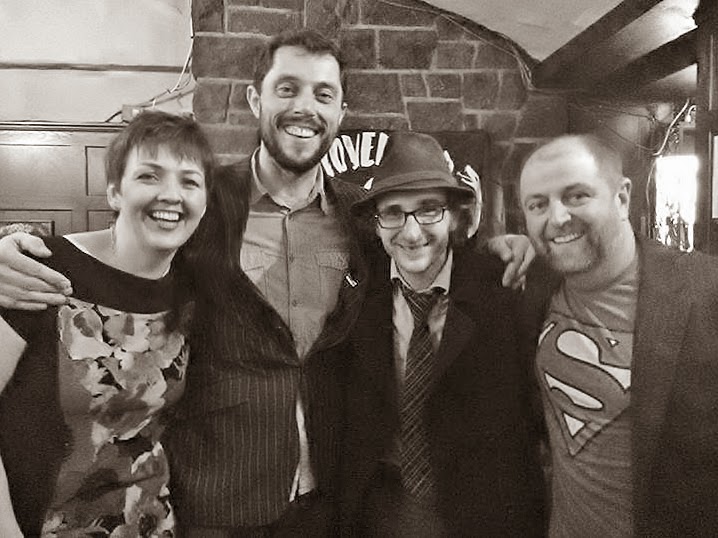 Where are you from?
Glastonbury, Somerset via South Yorkshire, East Anglia, Dundee & Edinburgh & then back to Glastonbury again!

Who else is in your band?
Ann Diment (wife) Percussion and backing vocals;
Cols Baird (Edinburgh) Guitar & Vocals;
Jez Hallows (Somerset) Guitar & Vocals.
For obvious logistical reasons Cols (our original guitarist) can't make too many gigs down South so an old mate of mine, experienced muso & fabulous singer Jez, has stepped into the vacant spot for a gig or two & is beginning to help my songs develop on different and exciting path – fun times!

How would you describe yourselves?
Roots influenced acoustic pop.

What do you hope to achieve in music?
To enjoy making music and to perhaps be able to make some money out of it one day. Not a fortune you understand but enough to recoup the some of the £1000s spent on musical equipment, gigs, recording, not to mention the hours put in at songwriting, learning how to play etc. If I could’ve only spent that sort of time, money and effort on my various professions over the years I’d be minted!

What has been the highlight of your career so far, and why?
I had a great booking at the beginning of February this year in a stately home in Perthshire where all the guests were parting and jiving to our tunes (most of which they’d never heard before) and they wouldn’t let us off stage. I was jetted in and out, fed, watered, accomodated and paid – that’s Rock & Roll!
Other than that, hearing my songs on the radio always gives me a little buzz!

And what’s the moment you want to forget?
I hate messing up solos and songs and that usually happens when I’m not very well prepared. There’s been a few open mics I wish that I’d stayed at home for.

If you had to pick just one of your songs to represent your music, what would it be and why?
It’s like asking which one of your kids you love the best! I guess “So Say Superman” is the kind of song I aspire to as it shows a level of lyrical smart arsery that I like over a very simple tune. As is typical of songwriters, I have a whole bunch of new ones which are my current favourites….

Anything else you’d like to say about your band/music that I forgot to ask?
Where next for the Revelators? We have a new full length album ready and waiting to record between now and summer 2014. My songs have been picked up by a number of roots and indie internet shows for worldwide broadcast which is pretty nuts!
I have a fabulous gig lined up for 15th  March at (of all places a Garden Centre in Somerset) supporting and playing with with two great musicians in Billy Shinbone (Flipron) and Nick Parker (Nick Parker & the False Alarms).
I also have a memorable night planned playing to Bristol Rovers fans on the 2nd of May song “Winky on the Wing” commemorates a friend and Gas player of yesteryear).
We have several offers of gigs up and down the country as well as a couple of festivals in the offing and a number of record companies interested in working with us!
Have a listen and if you like what we do, come and say hello on Facebook and find out more exciting times!