Fourth album from And So I Watch You From Afar

NORTHERN Irish rockers And So I Watch You From Afar have released their fourth album, Heirs.

It follows an intensive six-month writing period in Belfast for the band in which they created some of their most personal and meaningful work to date.

They told RealSoundsOK: "Its central theme is about the inheritance of ideas, in that we're all heirs to other peoples' passion, which in turn inspires ourselves." 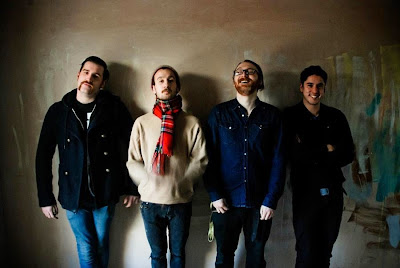 Guitarist Rory Friers continues: "We started making the album while touring in 2013. We would be recording demos in our hotel rooms, back stage and we would even hire out rehearsal rooms during days off."

The writing process for the album saw Friers, drummer Chris Wee, bassist Johnathan Adger and new guitarist Niall Kennedy amass about 30 new songs, which were whittled down to 15 and then a final cut of ten.

Friers added: "It's called Heirs as a tribute to a lot of new people who came into all our lives during the writing and recording of the album - lots of nephews and Johnny had a daughter, Eisa.

"It seems like the songs soaked up all those feelings we had during the writing. Because making the album was such an intentionally intense and full time experience none of us where listening to much other music or even experiencing much else outside of it.

"So, it feels like a very pure representation of what happens when these four people decide to make music together. It was a very intense time and the record has been shaped by that."

The band have put out the single Redesigned A Million Times, which you can listen to below. The album is available for order at iTunes and Sargent House.

For more on the band - including current tour dates across Europe and the UK - visit facebook.com/andsoiwatchyoufromafar

Email ThisBlogThis!Share to TwitterShare to FacebookShare to Pinterest
Labels: alt-rock, And So I Watch You From Afar, Belfast, news, Northern Ireland, rock, UK