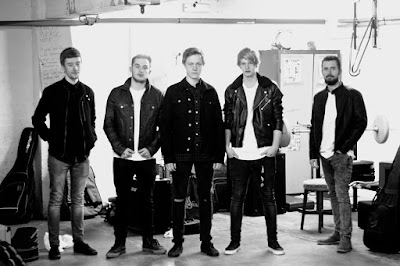 Where are you from?
North Lincolnshire, UK.

How would you describe yourselves?
In terms of a genre we call ourselves alternative rock because its a very vague term that we fit under; some people may disagree. I'd say the music is pop/punk rock and the vocals are quite soulful. Our songs are known for being catchy and have good hooks to them, which is what labels us "pop".

Who are your main influences musically?
Musically our influences come from some fairly heavy bands such as Foo Fighters, 30 Seconds to Mars and a Day to Remember.

What do you hope to achieve in music?
All we want is to be able to write and play music and to be able to play it in front of people who will appreciate it. We want our music to mean something to people, whether we have 300 fans in one country or 3million fans globally.

What has been the highlight of your career so far, and why?
For me my career highlight was winning the rock open last year. We have achieved some bigger things since, however that moment was very special. We were the underdogs in the competition and after being together for six months we didn't expect to get to the final at all. We lost our bassist weeks before the final but we found our current bassist shortly after and worked our socks off to get a perfect set in time. We played the final like a totally new band. It made me very proud winning it in my home town, I like to think we did Scunthorpe proud and for all my friends and family to be watching it made it even better. I think we showed everybody what we were capable of and surprised some!

And what’s the moment you want to forget?
We had a gig last year. It was one of the best gigs we played. It was shortly before the rock open final, our confidence level was on a high and the place was packed for us. However my gear was at the end of its lifespan and was holding on for one of its last gigs. It got to the end of our set and everyone was screaming for another song, we played all our songs and we couldn't play another one again because Ben's E-string snapped. Somehow we started playing a cover of "Waves" and it went terribly..no one really knew what they were doing and my amp decided to turn on wah for the whole song. It got so bad Steve eventually stopped the song and there was a long awkward pause on stage and in the crowd. We ended up walking off stage to let Steve and Jonno play one of their songs. I just wanted to curl up in a ball and die at the time. It's now a running joke in the band about playing the cover of Waves, however if I could forget that moment it would make me very happy!

If you had to pick just one of your songs to represent your music, what would it be and why?
I think our track 'Broken' represents us the best - it shows the best bits of us all really. It's the tightest track and the most "single-worthy" off the EP. The lyrics are powerful, the chorus is big and the sections are well thought out musically. I'd like to this that if people heard it it'd tempt them into listening to the EP.

Where can we listen to it? www.youtube.com/watch?v=II3PcAxm8YE

Anything else you’d like to say about your band/music that I forgot to ask?
We played a five-date UK tour this month where we showcased our new set and some brand new tracks from our EP, which you can listen to for free at http://www.youtube.com/playlist?list=PLHoCy1uBFeDnKS17kQq874_O9nK4O4oA6
Posted by RealSoundsOK at 22:16