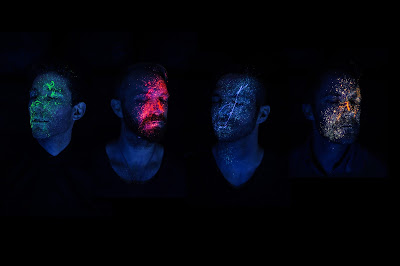 Where are you from?
Bath, UK.

How would you describe yourselves and your music?
Anglo-Indie-dance-punk-euphoric-neon-pop-rock.

Who are your main influences musically?
In terms of influences, there’s a bit of a journey to cover but it goes a little something like this… if Foals and Radiohead went out for a few drinks but bumped into Everything Everything and LCD Soundsystem on the way, you’d get part of the picture. Thing is, on the way back they stumbled into Ryan Adams and Patrick Watson in the kebab shop who were having a deep and meaningful conversation over a chicken doner about the illicit relations between Elbow and Queens of the Stone Age. It had all been a tremendous affair and got a lot of people worryingly aroused, including Soulwax, The Beatles, Muse, Bombay Bicycle Club and Darwin Deez.

What do you hope to achieve in music?
Reaching out to new ears.

What has been the highlight of your career so far, and why?
Highlight for us has got to be playing at Glastonbury Festival.

And what’s the moment you want to forget?
We played a few terrible venues in the early days, one in particular where we regretted accepting a booking at a venue in Somerset without looking into it (will not name and shame the pub). We played to a tiny crowd in what appeared to be a conservatory and members of the audience were mostly asleep before we started and those who were awake looked like extras from 'The Hills Have Eyes'. There was definitely something in the water or perhaps it was something to do with the radioactive looking cider everyone was drinking.

If you had to pick just one of your songs to represent your music, what would it be and why?
You, Me & Debauchery. It's our current single which represents our current blend of indie-dance-euphoric-neon-pop-rock.

Where can we listen to it?
https://soundcloud.com/centrefoldshq

Anything else you'd like to say about your band/music that I forgot to ask?
Here's some things other people have said about us...

“A creative multi-genre breakfast of champions, combining the best bits from punk, electronica, French house, trance and rock, bringing it together to create a sound that’s going to see Foals cowering in a corner behind Soulwax” – BBC 6 Music

“This band have the ability to craft addictive melodies while crossing genres” Fred Perry Subculture
Posted by RealSoundsOK at 23:02