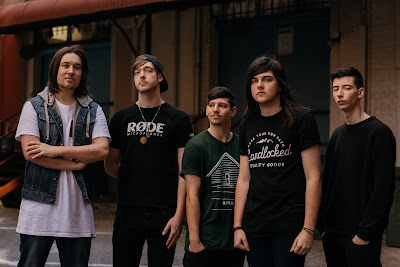 Your names:
Dylan (Lead Guitar) Declan (Rhythm Guitar) Tom (Vocals) Where are you from?
The wonderful town of Perth, WA. Name of band:
PATIENT SIXTY-SEVEN. Who else is in your band? Dylan: Jean-Luc Maitre, Jarryd Ralph, Declan Le Tessier, Tom Kiely and myself. How would you describe yourselves? Tom: If I had to pin it down to one genre, I’d say post-apolyptic lounge-core. Dylan: We are a metalcore/post-hardcore act. Our music also lays in electronic elements. Declan: A bunch of friends who all share a great passion for music and have come together to form as P67. We've found, as we gel well, that we work nicely together when it comes to blending ideas. Who are your main influences musically? Dylan: Our main influences are bands such as Thy Art Is Murder, Parkway Drive, Confession, Buried in Verona, Woe Is Me, I Killed The Prom Queen, In Hearts Wake, Miss Fortune, Northern Lights, Through Arteries, The Devil Wears Prada and Emmure. Declan: Myself would be a lot of metalcore influence so the likes of As I Lay Dying, All That Remains, I Killed The Prom Queen, Emmure etc. As each band member comes from a different sort of heavy background its great to see the genre that will become of that as we are discovering our sound. Tom: Aside from these heavier acts, everyone in the band listens to something different. Rap, punk, electronic -it all differs which I think is really cool. What do you hope to achieve in music? Dylan: We hope to create music people enjoy and relate to. We want the themes in our songs to connect on a personal level with people. Tom: And just to be the best that we can. And having fun while we’re at it, I guess at the end of the day - that’s what it’s all about, doing what you love. What has been the highlight of your career so far, and why? Dylan: Seeing the band grown in such a short amount of time has been the highlight. The ongoing support from our fans at the shows and online have really made us stronger as a band. Declan: Ahh, it's hard to name one exact moment of course, I mean putting out the EP last year was a huge thing for us. But the highlight i would say was probably the EP launch show we played. The atmosphere was unreal and the turnout was incredible.
Tom: Seconded, our EP launch for ‘Imbalance' was a show we’ll never forget. And what’s the moment you want to forget? Dylan: When my guitar plunged to the ground at the Rosemount hotel. Tom: When things just all go wrong at once, it just happens haha! If you had to pick just one of your songs to represent your music, what would it be and why? Declan: For me, I would say our song 'I Can Resist Anything, Except Temptation'. Lyrically, I feel, it's one of our more meaningful songs definitely. It was nice to hear that some people could relate. Also, I feel it is a little more technical, and that progression is fun for me. Dylan: Gustavo Bling. It was our first single and is as bouncy as a trampoline. Tom: The title track to our EP means a lot to me, it’s just really about picking yourself up and moving forward when things get hard, which I think everyone can relate to at one point or another. It’s also a lot of fun to play live! Where can we listen to it? bit.ly/ImbalanceYoutube

Where can we find out more about your music? FACEBOOK: facebook.com/PatientSixtySeven
YOUTUBE: https://www.youtube.com/user/patientsixtyseven TWITTER: twitter.com/patient67band
INSTAGRAM: instagram.com/patient67band BANDCAMP: www.patientsixtyseven.bandcamp.com TRIPLE J UNEARTHED: https://www.triplejunearthed.com/artist/patient-sixty-seven ITUNES: smarturl.it/Imbalance SPOTIFY: https://play.spotify.com/artist/1wklENd4yCkEW1u0fkJR2c SOUNDCLOUD: https://soundcloud.com/patient-sixty-seven BIGCARTEL/ONLINE STORE: patientsixtyseven.bigcartel.com UPCOMING SHOWS: http://www.bandsintown.com/PatientSixty-seven Anything else you’d like to say about your band/music that I forgot to ask? Dylan: Make sure you check out our facebook pages for any news or shows. Tom: Thanks as always for all the support!
Posted by RealSoundsOK at 13:56