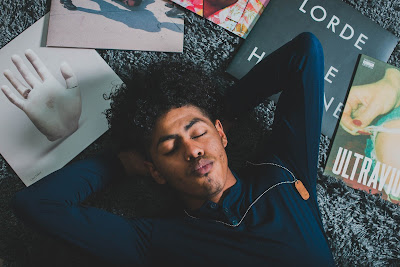 Where are you from?
Denver, CO.

How would you describe yourself and your music?
I would classify myself as indie/soul. I love acoustics, and really try to forge an emotional and natural groove for anyone to move with.

Who are your main influences musically?
My main influences would have to include Local Natives first and foremost. I love the depth and engaging rhythms they produce. Second, I would pay appreciation to the huge influence Frank Ocean has had over my sound from the beginning, and lastly I'd say Foxing. Foxing just has a supreme serene and somber sound that I love.

What do you hope to achieve in music?
In my days of making music, I would hope to achieve spreading love and understanding to all who choose to come on this adventure with me. Music heals the soul and offers guidance. I'd just love to do the same that many others have done for me.

What has been the highlight of your career so far, and why?
The highlight of my just developing career would have to be the creation and release of my debut EP. and first Single - Now I Say! I tend to be very frugal when releasing material because I want to make sure that it's at the quality I'd love for you all to hear. So finally being able to officially begin to make an appearance and present myself and my art to the world is liberating.

And what’s the moment you want to forget?
Oh man, the moment I'd want to forget if I had to, would be a show I presented at my High School a few years ago called the JHART Project. It was a charity show I organized with the Make-A-Wish-Foundation in hopes to raise money. In essence it was my first failure but a success as well. We raised about $250 for the kids but the show was a little sloppy haha.

If you had to pick just one of your songs to represent your music, what would it be and why?
To pick one song to represent me would have to be my Single - "Now I Say". It shows the many different musical influences I've adhered to along the way, giving you a jiggy rhythm that makes you want to dance but it also has soul roots that will evoke that emotion of past loves.

Where can we listen to it?
You can check it out here on my website: Hartnationep.com/music