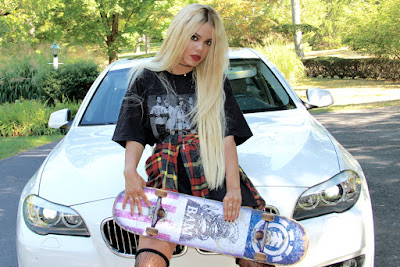 Where are you from? New York City, New York.

How would you describe yourselves and your music?
I describe myself and my music as soft grunge. Some 90s, some alt, some goth, it's a mix.

Who are your main influences musically?
I listen to a lot of 90s alternative and grunge bands, as well as some of the 80s new wave stuff and then the early-mid 2000s emo/pop rock stuff that was popular during my formative years.... So I guess I draw and take influence from all of those genres.

What do you hope to achieve in music?
I'd like to take my music as far as I can and branch out with other ventures (such as what I'm doing now with my clothing line Mk-Ultra90 clothing) . Why set limits?

What has been the highlight of your career so far, and why?
The process of recording and releasing music.. I love everything that goes into it; music videos, promotions, etc. I like being busy.

And what’s the moment you want to forget?
None that I care to share here. It would be nice to be able to go all Eternal Sunshine Of The Spotless Mind though.

If you had to pick just one of your songs to represent your music, what would it be and why?
"These Violent Delights" because it's thus far the song I'm most proud of.

Where can we listen to it?
https://www.youtube.com/watch?v=P3mpvaWwmB8

Anything else you’d like to say about your music that I forgot to ask?
Thanks to everyone for the support & glad you're listening to my stuff! The new cd will be out later this year! <3