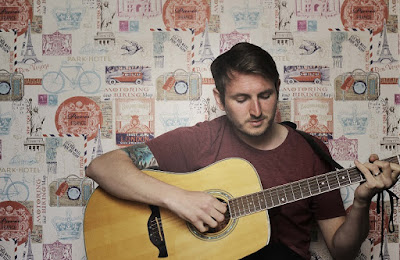 He is teasing it by streaming the single Playground Swings, which you can listen to below.

Marc told RealSoundsOK: "Late last year I went through a bit of a strange phase. For the first time in years I had no real musical plans; no tours, no release, I was uninspired to do anything musical.

"I started focusing pretty much all my attention on negativity, sitting around all day watching upsetting documentaries and getting bitter at the state of the world. It put things in perspective and made me realise that I've spent way too much time stressing over my 'musical career' as if it were anything but something I just love to do."

While maintaining nods to his rock roots, the artist from Witham, Essex, heads towards a folkier, bluesier sound with his solo work.

He added: "After a well-needed kick up the arse from a close friend, I started writing again and these songs were suddenly pouring out of me. Everything I wrote seemed to be about the bands I've been in, friendships and relationships I've formed and lost, and most of all, how much I regret taking it all too seriously.

"Bittersweet Memories was the result. It's the most honest, D.I.Y recording I've ever released, I recorded and mixed everything in my 'Man Cave' (garden shed) using only whatever I had in there. I even restrung my first ever guitar for the first time in ten years (£30 acoustic from Argos) and recorded two of the tracks with that, turns out it sounds awesome!

"This EP is a very simple, stripped back piece of work. My next release is going to be bigger and louder, but this is just what I wanted it to be."


Marc appeared at the Field Day festival in London over the weekend and has more dates lined up including in Brighton, Eastbourne and York.