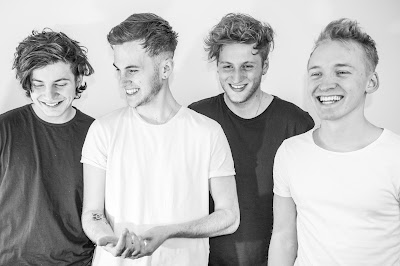 Where are you from?
Sheffield, UK.

Who else is in your band?
Lewis Cain, Sam Chapman and Danny Higgins.

How would you describe yourselves and your music?
We're four best mates who all met at sixth form, and that shows through our music. It's young sounding, poppy and personal.

Who are your main influences musically?
As a band were all influenced by instrument based pop music, such as Fleetwood Mac and The Smiths. But we all take different influences when it comes to the writing process. Lew's influenced a lot by American based rock such as Kings of Leon, I'm more influenced by bands like Oasis and the Neighbourhood, same with Danny, and Sam's music taste is very diverse, which is class to have as a drummer!

What do you hope to achieve in music?
I personally would be happy if we were putting out songs that we could see people connecting with, I think that's the same with the boys. I'd love to to a gig where we had 50 people singing back our tunes instead of a gig to 250 people who don't really care!

What has been the highlight of your career so far, and why?
There's been a few, we've had some pretty decent support slots with bands like Wild Child and Lisbon, and there always class because getting to play before a band we'd be paying to go watch anyway is a sick feeling!

And what’s the moment you want to forget?
Probably playing songs before we'd kinda found our sound, I feel sorry for our friends and family who had to listen to some of the stuff we were playing for them!

If you had to pick just one of your songs to represent your music, what would it be and why?
For me it would be a tune were putting out around August time, it's called 'I Can't Be Without You' and it was the first song we'd ever wrote that had a perfect balance of everything were about. The harmonies the boys sing on that make it a great song to play live. That, and our song 'Weekend' that were putting out too, it's very high energy and gives people a chance to have a bit of a boogie.

Anything else you’d like to say about your music that I forgot to ask?
Nice one for letting us do this Q&A Greg mate, it gives people a bit of a chance to get to know us a bit! cheers /x