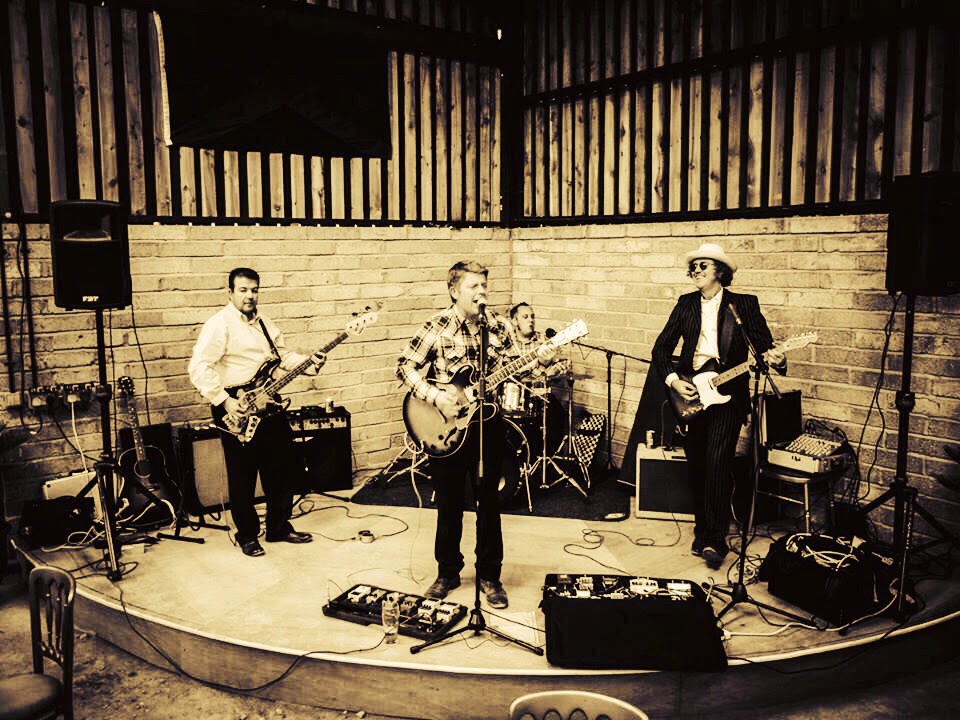 Where are you from?
We are from a seaside town in South Wales called Porthcawl.

Name of band:
The South Road.

Who else is in your band?
Dean "Smythers" Smith on guitar, Christian "Pip" Dobbin on bass, Dangerous Dave Price on drums and myself on guitar and vocals. On our first EP we had Dasher (Treehouse Fire) guesting on keys.

How would you describe yourselves?
Three of us had been playing in a cover band (and still are) and when Dave filled a vacancy on drums around two years ago, he liked our sound and suggested we start writing. Well, we did and released a three-track EP in July 2013. We were pleased and surprised with the results and writing and developing our own material has taken on more importance as time as gone on. We love to play live and still go out playing covers and we see it as an opportunity to play gigs whilst honing our original material. We are in the process of recording our next EP at the moment and with lots of good (we think) songs in the pipeline, will have sufficient material to start chasing live opportunities as The South Road by early next year. We are also looking to bring in a permanent keys player by that time and would love to have had Dasher, who worked on our first record, but he is doing very well and recording and touring with his own band, Treehouse Fire - check them out.

Who are your main influences musically?
Smythers and myself listen to a lot of alternative country, country, any genre of country really but I draw the line at Dolly Parton and Kenny Wayne Shepherd, ha ha. Our music is certainly what you might describe as "indie" and I would say we are influenced by Band of Horses, Delta Spirit, Tom Petty, The Lemonheads and the godfather of it all, Neil Young. We are not a young fresh-faced band by any means (average age 37 - with Dave bringing it down nicely, thanks Dave) but when I look at Neil and of course that rock and roll granddaddy, Willie Nelson, I realise not being 21 is probably a good thing for us and our writing, especially the type of music that we aspire to make.

What do you hope to achieve in music?
We are just looking to make music that we like and if we can push it a little, get a fan base and play to audiences who come because they know and like our stuff, well, that sounds like a great thing to have in your life.

What has been the highlight of your career so far, and why?
The highlight so far would have to be our first play on radio. Picture the scene, four guys who love music sat around Dave's kitchen table waiting for the @NeuPotatoes show to start on @ChanelRadio and they played Way to Walk as the opening track! You cannot buy that shit - the guys on the show, Jamie and Paul The Producer, have played us good number of times now and always have great things to say about our music, which is pretty sweet.

And what’s the moment you want to forget?
As a covers band "The Smythyereens", about five years ago, we were booked to play a small function that turned out not to be an ideal fit for us or them. During the opening track I looked up and sat in front of me was an old lady staring straight into my eyes with both fingers in her ears! As it happens my dear old grandma, a musician herself in her younger days, loves our music.

If you had to pick just one of your songs to represent your music, what would it be and why?
The bands that I love are able to record albums that cover slower, more acoustic driven songs up to more punchy, driving tracks, whilst staying true to their style and ideas. That is my aspiration for The South Road and hopefully we are getting there, so I think the track that sits in the middle of that spectrum, so to speak, would be Way to walk.

Where can we listen to it?
We recently recorded a video with our friends Unit 15 Productions so check us out looking like knobs on Youtube https://www.youtube.com/watch?v=AMZlF4bEBwk&feature=youtu.be

Where can we find out more about your music?
Our music is available on iTunes, Amazon mp3, Rdio, Spotify etc. We have a Soundcloud site, website: www.thesouthroad.co.uk Twitter @thesouthroad